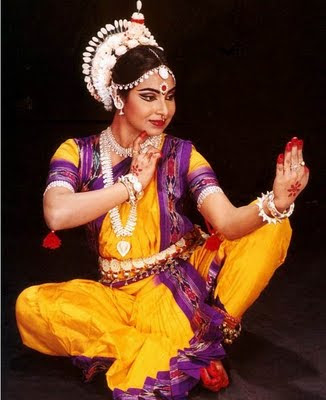 Shayomita Dasgupta's love for dance transcends all barriers and endows in her a feeling of heavenly bliss & tranquility. She delved into the arena at a very tender age of four when she nutured the nuances of Kathak & Manipuri form of dences. Subsequently, she welcomed with open arms other dance forms as well and took on Odissi in the early nineties as her source of sustenance and creativity. She recalls her acquaintances with Guru Kelucharan Mohapatra in 1995 as the turning point in her life and career. Along with the doyen, she churned up major roles in dance sequences which won her laurels. Her acquaintances with SRJAN brought her in close association to Guru Ratikant Mohapatra and mede her familiar with Guru Kelucharan Mohapatra Gharana. She has been performing in various TV channels with distinction notable Doordarshan, Tara Music, to name a few.
AWARDS & RECOGNITIONS IN THE FIELD OF ODISSI DANCE
Trained in Odissi form of dance under the tutelage of internationally acclaimed doyen of odissi dance Late Guru Kelucharan Mohapatra. Associated with Guru Ratikant Mohapatra through association of SRJAN.
Performing in various TV channels with distinction notably Doordarshan, Tara Music to name few.
Recipient of National Scholarship under Guru Kelucharan Mohapatra, awarded by The Ministry of Human Resources Development, New Delhi in 1996.
Awarded Sangeet Bivakar by Bangiya Sangeet Parishad in 1996.o Gold Medallist at Youth Festival in 1996.
Secured the first position in the competition organized by Paschim Banga rajya sangeet Academy in 2002.o Earned unqualified appreciation for participating in dance composition on‘Vande Mataram’ & also for appearing as Sita in dance drama ‘Dashanan’,both performed,directed & choreographed by Late Guru Kelacharan Mohapatra at Konark Festival in 2000. Awarded by India Theatre Olympiad,Orissa ‘National Nriya Bhushan Award,2009’.
Shayomita has also carved a niche for herself in the field of television as a tele-star darting out important & centralized characters in numerous occasions. With her never-ending desire to achieve the pinnacle of success and scale towering heights. Shayomita is all set to justify her credentials and give her heart and soul to this unique form of dance (ओदिस्सी)
Shayomita Dasgupta has earned a Bachelor of Arts from Gauhati University with a major in English.