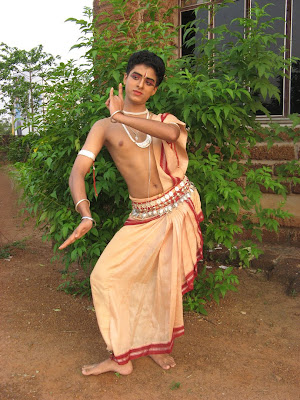 Soumya Bose initially trained into odissi dance at his hometown Kolkata, in his childhood, at Odissi Vision and Movement Centre, Soumya completed primary and secondary course of odissi dance there.He was soon drawn towards the fluidity and lyrical mysticism of pure Odissi. So, he came to orissa (The land of Lord Jagannath)for better training. He learnt odissi dance from Guru Kelucharan Mohapatra Odissi Research Center for two years. Now he is being further nurtured under Guru Shree Naba Kishore Mishra at 'Abartta '.and performing widely as a senior and solo artist in his troupe. He received the benefit of learning under the guidance of great teachers at Guru Kelucharan Mohapatra Odissi Research Centre. He also had the privilege to learn from Guru Shree Manoranjan Pradhan. He is now continuing graduation in Utkal Sangeet Mahavidyalaya ,Bhubaneswar.
EMAIL- ID-soumyabose21@yahoo.com
Posted by ODM