In Memory of Guru Gangadhar Pradhan

The Odissi community mourns the loss of the beloved Guru Gangadhar Pradhan - one of the foremost exponents of Odissi Dance - and the Founder-Director of Konark Natya Mandap and Orissa Dance Academy.    He began his Odissi training at age six as a Gotipua dancer.  After completing his Natya Acharya in Odissi from Utkal Sangeet Mohavidyalaya under able guidance of Guru Pankaj Charan Das, Dr. Minati Mishra and Guru Deb Prasad Das, he received intensive training from Guru Kelu Charan Mohapatra.  He was also a maestro Mardala player. 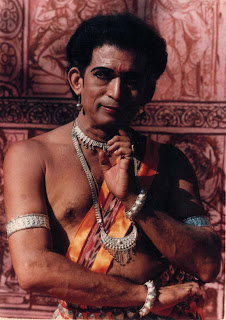 A recipient of the State Sangeet Natak Akademi Award in 1993 and the Central Sangeet Natak Akademi Award in 1998, the Padmashree award from the President of India in 2008, Guru Gangadhar Pradhan also served as the President of Orissa Satate Sangeet Natak Akademic, and promoted and preserved the classical tradition and culture through the Konark Dance and Music Festival, Dhauli Mahotsav, Kalinga kala Utsav and Odissi Sandhya every year in Orissa.
Gangadhar Pradhan begins his Odyssey on Odissi
By Barnali Pal in Konark - The Deccan Herald
Kelucharan Mohapatra, the legendary Odissi icon, will always be remembered and revered throughout the world as the guru who took it upon himself to carry Odissi dance to lofty heights.

Gangadhar Pradhan receiving Padma Shri from President Pratibha Patil.Now a frail-looking man with grit and steely determination has vowed likewise to showcase Odissi to the outside world, as well as project and promote Orissa’s rich cultural heritage. He is Guru Gangadhar Pradhan, himself an accomplished Odissi dancer and founder-director of Konark Natya Mandap and Orissa Dance Academy.

Guru Gangadhar Pradhan’s transition from a Gotipua (a dance tradition dating back to 16th century in which young boys dressed up as girls perform) to a musician and Odissi dancer, to a guru came through his numerous performances, choreography both in India and abroad and association with the extraordinary dancing sensations like late Sanjukta Panigrahi.

“My mother-in-law and social worker Sushilavati Swain asked me to start some cultural activity in Konark, so we acquired a piece of land in 1978. Two years later, we built a mud hut and called it the Konark Nata Mandap. Every Sunday we had a meeting and artistes from the nearby areas would come and spend the entire day singing, dancing and playing various musical instruments,” Gangadhar Pradhan says. This created an ambience of culture. The mandap’s activity started in 1980 as a small get-together but soon there was no looking back as it paved the way for the five-day
international Konark Dance and Music Festival, that is held every year in this small town of Orissa.

Besides, the Konark Nata Mandap was re-christened Konark Natya Mandap (KNM). It has undergone several changes over the years. And, it has finally taken the shape of the replica of the world famous Sun Temple.

“The festival started in 1986 on the day of Shivaratri. But the seeds of the festival were sown in my mind when I had gone to the Swedish embassy and saw posters of the Khajuraho Festival there. That’s how the idea of the Konark Dance and Music Festival took shape in my mind,” remarks Pradhan.

In the true sense, it was the harbinger of the contemporary festivals of Odisha. “The main objective of the festival is not merely to provide entertainment but to educate and refine. It aims to harmoniously blend the classical, spiritual, tribal and folk
aspects of the glorious cultural traditions.”

Built through the painstaking efforts of Gangadhar Pradhan, KNM now is a performer’s delight. A replica of the natyashala of the scintillating and stupendous Sun Temple of Konark, it provides the right kind of ambience for artistes, connoisseurs and art lovers from India and abroad.

The KNM serves as a temple of learning. Following the glorious traditions of Guru Kula Parampara, it provides teaching and training in dance, music, yoga and theatre. Classes on Odissi dance, Gotipua dance, mardal, tabla and Odissi music are being conducted on its premises. Experienced gurus and teachers share their experience with students who get the privilege of presenting their skill on the three stages erected on the premises.

That apart, KNM is functioning as an institution of cultural consultancy in the state for the growth and propagation of Odissi, tradition and classical art forms both at national and international levels. The mandap has shouldered a big responsibility of popularising Odissi dance and the sculptural epic Konark has metamorphosed into a living Konark.

Talking about his dream, Gangadhar Pradhan says that something should be happening in KNM throughout the year. “Now there is a festival happening 220 days in a year.” He is confident of achieving his goal by the middle of this decade.

Explaining about Living Konark, he said that people had seen Konark in stone, now they would see the living Konark and the dancing Konark. Once, this dream materialised, there would be a computerised film on Konark that would be screened.

“When I had given wings to my imagination, I had dreamt of the future 1000 years’ history which takes into account the cultural, spiritual and ritualistic aspects. The triangle of Konark-Puri-Bhubaneswar-Chilka will develop tourism as well as culture. What the tourist sees in one place will not be repeated in other places, so he or she will get to see something new each time,” he added.

This Odissi dance guru whose sole aim is to promote Odissi to the outside world has created teachers, students and even about three dozen organisations in the country as well as abroad. Gangadhar Pradhan has the vision and his dreams of cultural integration becoming a reality is only a matter of time. He can do it, for he has 'miles to go,
before he sleeps’. Tennyson would come alive one day to write of Gangadhar’s passion ‘Men may come and men may go, but I go on forever...’

Your remembrances may be posted by clicking "comments" below